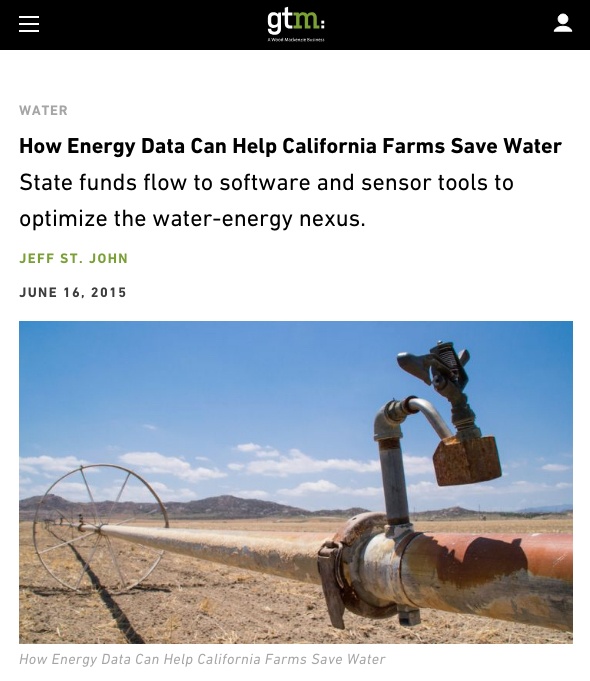 State funds flow to software and sensor tools to optimize the water-energy nexus.

As California imposes unprecedented water restrictions on farmers to help deal with its ongoing drought, it’s also funding technologies to help farmers make the most of this limited resource.

Finding the data to guide wise water decisions is a big part of this push -- and one way to get that data is by tapping the state’s increasingly networked electricity infrastructure.

That’s the approach being taken by two projects recently awarded grants by the California Energy Commission. In simple terms, they’re seeking to convert data from electric meters, well and irrigation pumps, soil moisture sensors, and other on-farm systems into accurate and real-time information on where water is being used, where it’s being wasted, and how it can be more effectively put to use.

About 4 percent of the state’s electricity is used for agricultural water management, according to a 2005 study from the California Energy Commission. That makes for a significant linkage between energy efficiency and water efficiency -- commonly dubbed the “water-energy nexus.”

PowWow’s first software platform was built to detect water leaks by analyzing the data coming from smart electric meters that provide them electricity. Irrigation Advisor builds on that expertise, but adds in a lot of new data, both from public sources and from farmers’ equipment and records, he said.

“We are integrating irrigation models from UC Davis, soil maps from the USDA Natural Resources Conservation Service, aerial imagery, and local sensor data that farmers want us to look at, to provide an integrated crop management solution,” he said. While many of these tools are drawn from research conducted by government agencies and universities, “the problem is putting all of those fragmented data sets into one place, managing the privacy concerns of growers, and giving them the answers on their phones,” he said.

PowWow started working on the Irrigation Advisor platform with almond growers, who’ve been singled out for growing a crop that requires a lot of water -- about 10 percent of the state’s agricultural sector usage, which itself accounts for about four-fifths of total water consumption. At the same time, almond growers have been turning to more efficient watering methods such as drip irrigation systems, which deliver carefully calibrated amounts of water to each almond tree.

PowWow’s platform can use those irrigation records along with existing soil moisture sensors if they’re available -- or calculate soil moisture evaporation and transpiration for those that don’t -- to reduce the uncertainty of whether or not each tree is getting enough water to keep it healthy.

“In a drought year, you have a limited amount of water, so you may want to work a 70 percent allocation and try to maintain your yield. We will offer that module -- partial irrigation with stress management -- so we can make sure the plants are not that stressed,” he said. On the other hand, “any water not used by the plant will percolate back into the aquifers,” he said. “During a wetter year, you may want to put more water back.”

No matter what advice PowWow’s software gives, it has to come within 24 hours, and it has to come with multiple data points to give growers confidence in its results, Jerphagnon said. Without these two factors, farmers are likely to ignore what the software is telling them, and stick with tried-and-true methods. At the same time, “adding too much data to look at is not the way to go,” he said. “You really want something on your smartphone, something really simple.”

Similar problems can prevent farmers from optimizing their energy use, said Nic Stover, CEO of CalCom Solar. The Visalia, Calif.-based company partnered with San Francisco-based Wexus Technologies on a project that won a $4 million CEC grant to commercialize a cloud-based mobile platform that combines energy data analysis with easy-to-follow recommendations on reducing waste and optimizing operations.

CalCom Solar is developing more than two dozen large-scale solar PV projects in California’s Central Valley, focusing primarily on meter aggregation for farms and water districts, he said. Meter aggregation is a version of net metering that allows rural solar customers to measure the electric usage of meters across their properties for calculating the value of solar power generated in excess of usage -- “everything from pumps, to shops, to houses, to whatever’s on their contiguous pieces of property,” he said.

As a former executive with M2M Communications, a demand-response provider specializing in large-scale irrigation systems acquired by EnerNOC in 2011, Stover is well versed in the challenges farmers face in understanding how they’re charged for the electricity they consume. “We have one client who has 135 pumps and meters, with a whole bunch of data on them,” he said. “These pumps can be spread across tens of thousands of acres.”

Using a combination of smart meter data where it’s available, or utility bill data collection and integration services from companies like UtilityAPI where it isn’t, “we’ve become intimately connected with these customers’ data,” he said. “I have tens of thousands of data points from ag clients. What we’ve started to see is, once you have benchmarked data, you can start to determine, is the pump drifting? Should we be getting a pump test ordered to see what inefficiencies are out there?”

“The next step with Wexus is, how can we automate this process? That’s where the grant is coming in,” he said. “We can start to see [things like] what your projected usage is based on historical data -- you’re 6 percent higher here in this area, what’s going on? -- or set up alerts and notifications based on changes in irrigation patterns and energy-usage patterns.”

Like PowWow, Wexus churns through a lot of data on behalf of its farmers, but condenses it for presentation via smartphone alerts or emailed reports. The startup has been working for the past nine months with five Central Valley pilot customers, Stover said, “reviewing their weekly reports with these big farm managers, running in a rapid prototype fashion, to ask them, ‘What does this meant to you? How do we modify this?’”

CalCom has also developed a software tool, dubbed Solar Ag Energy (SAGE) analysis and forecasting, meant to model a farm operation’s energy needs for different plans for the coming years, he said. “Say a client is purchasing a new piece of property, and they want to know what [will] my energy consumption [be] as my trees mature, or the crops come out…or if they have a diesel or natural gas pump and they want to switch to electric.”

Both PowWow and CalCom/Wexus are also seeking to capture more data from the pumps that draw water from wells. Groundwater is increasingly being drawn from California aquifers to compensate for ever-scarcer surface water, and "anything having to do with those pumps is becoming a very valuable asset," Jerphagnon said.

Both of the grants came from a 2014 CEC solicitation for energy efficiency projects for the industrial, agricultural and water sectors. In his January declaration of a drought emergency, California Gov. Jerry Brown directed the CEC to create a new Water Energy Technology (WET) program to direct more funding to technologies aimed at improving the efficiency of the water-energy nexus.

While farmers have largely avoided the brunt of the state's water conservation regulations, last week the California Water Resources Control Board announced it would restrict access to surface water for growers with legal claims stretching back to 1903, a step taken only once before in the state's history. There’s arguably never been a better time for growers to turn to this data for aid -- if it can be turned quickly and accurately into information that they can use.