Is 2020 Over Yet? Record Breaking Wildfires & Impacts on California Growers 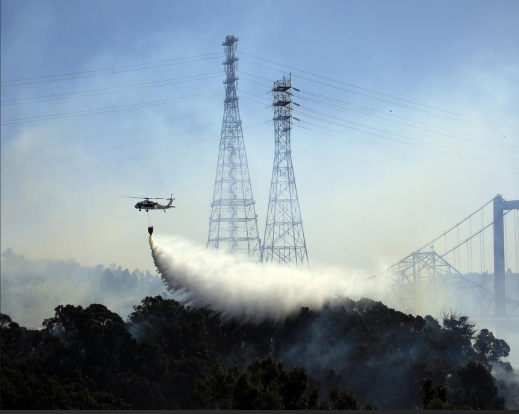 Four million acres of wildfires caused by record-breaking high temperatures, drought and freak lightning storms burned across California this summer and fall. The tremendous impact of multiple, consecutive years of wildfires has left many consumers - and growers - feeling uneasy. California's agricultural industry has been facing a myriad of challenges caused by smoke and ash buildup as well as crop and property losses - and power shutoffs to reduce the risk of starting new fires. The cloudy haze caused by ash affected crops and workers, leading to new complications in the middle of harvest season - in addition to the ongoing Covid-19 pandemic.

As produce ripened and fires raged, agricultural workers took to the fields to harvest

High temperatures, ash, and heavy smoke from multiple wildfires all contributed to poor air quality across huge portions of the state. This complicated outdoor working conditions for growers who in some cases had to shorten work hours and provide more personal protective equipment (PPE) to reduce exposure to workers. This in turn led to delayed harvests for some crops.

Crops were also impacted by the ash, smoke and haze which hindered access to sunlight. According to Growing Produce, less sunlight can lead to slower growing times and higher plant disease loads. And some crops like wine grapes can be susceptible to smoke taint. Prolonged exposure to smoke can produce smokey off-flavors in wines. According to Ag Alert, some growers had entire crops “spoiled by smoke and rejected as unusable by wineries" while labs conducting smoke analyses of wine grapes were backed up for weeks. Growers who were forced to wait on lab test results faced the risk of their crop becoming tainted by smoke - and being unable to harvest it at all.

But some crops were less affected by the smoke

Vegetables and leafy greens like head lettuce - whose outer leaves are peeled - and spinach - which is typically washed directly after being harvested - were minimally affected by ash buildup. And California farmers grew more rice this year than last year: 507,000 acres in 2020 compared to 498,000 acres in 2019, according to the latest USDA data.

Solar energy output was lower due to smoke and ash buildup

An underreported and costly ripple effect of the wildfires and smoke buildup was the large drop in solar energy production across the state. Solar arrays obviously need sunlight to produce energy. And so much smoke and haze clouded California skies - and so much ash accumulated on solar panels - that solar energy production dropped as much as 30% statewide in September 2020 vs July 2020. This in turn was one of the factors - among many including poor planning and mismanagement  -  that led to large blackouts from California's CAISO and Investor Owned Utilities (IOUs) which hadn't been seen since the early 2000's.

Energy blackouts cause extreme risk and hardship for the food and agriculture industry. No access to electricity means you can't run irrigation pumps to feed water to thirsty crops - resulting in reduced crop yields and farm revenue loss. And without electricity, large industrial facilities like food processors can't move crops from the field to your local grocery store without some form of backup power to cool produce, run pumps and fans, and provide lighting. On top of that, many on-site, grid-tied solar arrays have built-in safety measures to stop producing energy if the power grid shuts down.

This loss of energy production wasn't just limited to large, utility scale solar projects. It also affected thousands of consumer-owned or leased solar arrays - including ground-mounted arrays on farmland and rooftop arrays on offices and homes. Our team saw this firsthand with several customer solar arrays. With Wexus' IoT software platform, we were able to identify losses in solar ROI and help alert customers to have solar panels cleaned - or inverters reset or replaced under warranty - before these losses accumulated and affected energy production and end-of-year true ups.

In a difficult year for agriculture - Wexus can help!

This is definitely an understatement - but wildfires across the Western United States and the Covid-19 global pandemic have left all of us highly stressed. And they've complicated business operations, led to the loss of property and crops, and posed serious health risks. At Team Wexus, we understand how stressful this year has been for the food and agricultural industry and our customers and partners. Our mission is to relieve some of that strain with our IoT technology platform which helps growers automate labor tasks, helps manage equipment and assets including solar arrays, saves money, energy, and water - and ultimately reduces impacts to your bottom line (and stress levels).